What happened in Tulsa?
Many African Americans moved to Oklahoma in the years before and after 1907, which is the year when Oklahoma became a state. Oklahoma represented change and provided a chance for African Americans to get away from slavery and the racism of their previous places of residence. Most of them traveled from the states in the south. Oklahoma offered hope and provided all people with a chance to start over.
A lot of the settlers were relatives of African American slaves who traveled on foot with the Five Civilized Tribes along the Trail of Tears. Others were the descendants of runaway slaves who had fled to Indian Territory (present day Oklahoma) in an effort to escape lives of oppression.
When Tulsa became a booming and rather well noted town in the United States, the residents and government attempted to leave out important aspects of the city. Many people considered Tulsa to be two separate cities rather than one city of united communities. The white residents of Tulsa referred to the area north of the Frisco railroad tracks as “Little Africa”. They were threatened by the success of the African American community and worried that the community might continue to grow. This community later acquired the name Greenwood and in 1921 it was home to about 10,000 African American men, women, and children.
Greenwood was centered on a street known as Greenwood Avenue. This street was important because it ran north for over a mile from the Frisco Railroad yards, and it was one of the few streets that did not cross through both black and white neighborhoods. The citizens of Greenwood took pride in this fact because it was something they had all to themselves and did not have to share with the white community of Tulsa. Greenwood Avenue was home to the African American commercial district with many red brick buildings. These buildings belonged to African Americans and they were thriving businesses, including grocery stores, clothing stores, barber shops, and much more. Greenwood was one of the most affluent communities and became known as “Black Wall Street.” 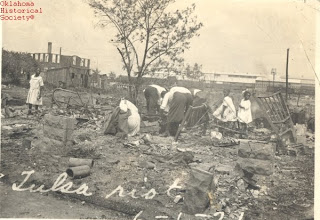 During the oil boom of the 1910s, the area of northeast Oklahoma around Tulsa flourished—including the Greenwood neighborhood, which came to be known as "the Black Wall Street".
The area was home to several prominent black businessmen, many of them multimillionaires. Greenwood boasted a variety of thriving businesses that were very successful up until the Tulsa Race Riot. The buildings on Greenwood Avenue housed the offices of almost all of Tulsa’s black lawyers, realtors, doctors, and other professionals. In Tulsa at the time of the riot, there were fifteen well-known African American physicians, one of whom was considered the “most able Negro surgeon in America” by one of the Mayo brothers. When many in other communities looked over and saw what the Black community created, they grew jealous. When the average male student went to school in Greenwood, he wore a suit and tie indicating the morals and respect they were taught at a young age. The mainstay of the community was to educate every child.
The “Riot” 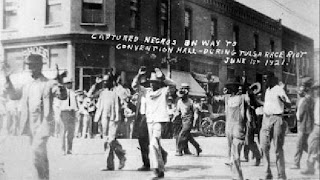 The riot began because of an alleged assault of a white woman, Sarah Page, by an African American man, Dick Rowland. Rowland had tripped upon entering the elevator and, in an effort to prevent himself from falling, grabbed the arm of Page, who subsequently let out a startled gasp or scream. The Tulsa Tribune got word of the incident and published the story in the paper on May 31, 1921. Shortly after the newspaper article surfaced, there was news that a white lynch mob was going to take matters into its own hands and kill Dick Rowland.
Small groups of armed black men began to venture toward the courthouse in automobiles, partly for reconnaissance, but with their weapons visible, they were also demonstrating that they were prepared to take necessary action to protect Rowland.
A misunderstanding ensued when a gunshot was fired in the air. The gunshot triggered an almost immediate response by the white men, many of whom returned fire on the black contingent, who exchanged fire. The black men retreated toward Greenwood, but not before several men, both white and black, lay dead or dying in the street.
The now considerably armed white mob pursued the black group toward Greenwood, with many stopping to loot local stores for additional weapons and ammunition. Along the way innocent bystanders, many of whom were letting out of a movie theater, were caught off guard by the riotous mob and began fleeing also. Panic set in as mobsters began firing on unassuming blacks in the crowd. Rioters were shooting indiscriminately, killing many of them along the way. No one was exempt to the violence of the white mobs; men, women, and even children were killed by the mobs.
Attack by Air
Numerous accounts described airplanes carrying white assailants firing rifles and dropping firebombs on buildings, homes, and fleeing families. The planes, six biplane two-seater trainers left over from World War I, were dispatched from the nearby Curtis Field (now defunct) outside of Tulsa. White law enforcement officials later claimed the sole purpose of the planes was to provide reconnaissance and protect whites against what they described as a "Negro uprising." However, eyewitness accounts and testimony from the survivors confirmed that on the morning of June 1, the planes dropped incendiary bombs and fired rifles at black Tulsans on the ground.
As the fires spread northward through Greenwood, countless black families continued to flee. Many died when trapped by the flames. During the 16 hours of rioting, over 800 people were admitted to local hospitals with injuries, an estimated 10,000 were left homeless, 35 city blocks composed of 1,256 residences were destroyed by fire, and $1.8 million (about $21.7 million in 2009 dollars) in property damage was caused.
Officially, thirty-nine people were reported killed in the riot, of whom ten were white. The actual number of black citizens killed by local white militiamen and others as a result of the riot was estimated in the Red Cross report at around 300, making the Tulsa race riot the worst in US history. Other estimates range as high as 3,000. 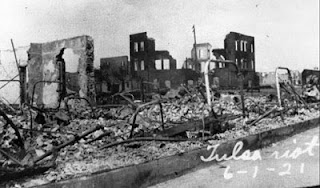 In 1997, following increased attention to the riot brought on by the seventy-fifth anniversary of the event, the Tulsa Race Riot Commission was created to study and develop a "historical account" of the riot. The report of the commission recommended Direct payment of reparations to survivors descendants of the survivors of the 1921 Tulsa riot. A documentary has been made about the Survivors of the Tulsa Race Riot and their quest for justice. The name of the documentary is "Before They Die!" This documentary chronicles efforts in Oklahoma to gain reparations for the survivors.
Published by Alan Dixon at 8:47 AM

wow. My family is from Oklahoma and I'd heard about Black Wall St. before, but this article and video are great. No one was ever prosecuted?

So disgusting. America is still pulling 'Tulsas' anyway possible today! While whites have always been able to have alcohol (THEY were the ones having a murderous tantrum during prohibition). But as I type, in L.A., the money of blacks trying to enter the cannabis business is being drained away by red tape, insane requirements, and delays. Many of the people on the list have invested their lives and are watching their savings dwindle, while whites seem to be winning prime spots and not facing the same obstacles. Because we were killed or jailed when there is progress, we never get to pass anything down. We tread water, while being disparaged, lied about and killed. 400 years of this? Where is your Jesus/God? Where is karma? Why dooooo these criminals and barbarians remain untouched, powerful, unnaccountable.

I say if whites want this place to themselves, every non-white should get a trade or degree and do a mass exodus to pay taxes to more humane countries. If only, right? I feel sick waking up every day in a place where people cover for supremacy from the system to the president. I feel sick that nothing every happens to them. This is the last time I watch the stupidity of American voting put my sons' lives in danger, my life, my family's potential. America does not deserve our investment (our ancestors built their stupid house) because America never invested in us...the non whites, the natives, the gays, the mentally ill and disabled. They take take take here in America.

I say test the hatred of bigots by setting up exodus accounts. If they want us gone so bad, pay us what our ancestors were owed via gofundme....deport us with 250k each. Ha, that's nothing compared to what they stole!