What happened? Thirty Eight years ago some eight thousand African Americans (three thousand of whom were official delegates) arrived in Gary, Indiana, to attend their first convention, which was more commonly known as the "Gary Convention.” A sea of Black faces chanted, "It’s Nation Time! It’s Nation Time!" No one in the room had ever seen anything like this before. The radical Black nationalists clearly won the day; moderates who supported integration and backed the Democratic Party were in the minority.
"Economic, cultural, and spiritual depression stalk Black America, and the price for survival often appears to be more than we are able to pay." This was the state of the union according to delegates to the first National Black Political Convention, March 10-12, 1972. The disparate group included elected officials and revolutionaries, integrationists and black nationalists, Baptists and Muslims (the widows of Martin Luther King, Jr. and Malcolm X -- Coretta Scott King and Betty Shabazz -- both attended). They met in Gary, Indiana, a majority black city where they were welcomed by a black mayor, Richard Hatcher. The one group that was excluded was whites (for that reason, Roy Wilkins of the NAACP, an organization that supported integration, criticized the meeting). Participants were buoyed by the spirit of possibility, and themes of unity and self-determination. 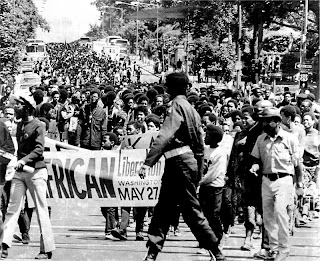 This convention was an attempt to bring together representatives of very different orientations and perspectives among Black people in order to forge a National Black Agenda. Despite some serious disagreements about tactics for the movement, 8,000 people united around the need to dialog and develop a collective strategy.
The political atmosphere in the country was marked by the strength of the Republicans. Nixon was running for re-election with a "Southern strategy" of appealing directly to white supremacy and the sentiment among many whites was that the U.S. had done enough for Black folks. Forty-five states sent delegates to help to sum up what the movement had accomplished, to figure out how to consolidate the gains that had been won and make plans for dealing with this growing backlash. African Americans set out to develop a national Black agenda under the theme "Unity Without Uniformity."
Workshops and caucuses covered a wide range of topics. Subjects of debate included whether to develop new institutions to deal with unemployment, reparations, national health care, and how to establish meaningful environmental safeguards. However, a big question on the minds of many was whether the diverse political forces could hold together long enough to ratify a Black political agenda.
Serious debate centered on a number of issues, especially on planks being proposed for a National Black Political Agenda. One controversial resolution condemned Israel for its "expansionist policy" toward the Palestinians. Another condemned "forced racial integration of schools." The latter measure came from Southerners who said integration cost black teachers jobs. The Michigan delegation, dominated by union members and staff, felt that the wording and the tone of the proposed Agenda was too separatist and may hurt its alliances with organized labor. They opposed, for example, a 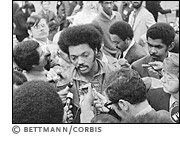 proposal urging blacks to shun "discriminatory" unions and form their own.
The document finally adopted was a very radical one, reflecting the summed-up experience of the preceding years and a determination by many not to let the most conservative forces set the tone. The Gary Declaration (which was published on the birthday of Malcolm X, May 19, 1972) pointed out, "The American system does not work for the masses of our people and it cannot be made to work without radical fundamental change. Indeed, this system does not really work in favor of the humanity of anyone in America."
One major issue around which different tendencies manifested themselves was electoral politics. The Gary Declaration set the tone, stating, "Both parties have betrayed us whenever their interests have conflicted with ours (which was most of the time), and whenever our forces were unorganized and dependent, quiescent and compliant."
Behind this unity resided a broad range of views, none of which crystallized into broad organized groupings. Nationalist and revolutionary forces who opposed electoral work on principle did not have a consolidated voice. Neither did those who advocated an immediate break with the Democratic Party. 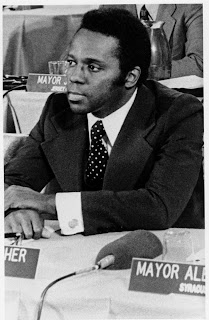 There was another position which basically sought to stay the course with the Democratic Party. Elected officials like Mayor Hatcher and Charles Diggs were not interested in jeopardizing their careers by breaking publicly with the Democrats. Although many within this camp had been advocates of Black Power at some point in the recent past, they tended to believe that reform efforts such as affirmative action laws, school desegregation, and the establishment of independent Black institutions were the correct path on the road to salvation. This grouping did not organize effectively among forces it might have united, either. They also couldn't bring along cultural nationalists who continued to advocate the need to establish all-Black institutions, but were less than clear on the financial base for such proposals.
A smaller and somewhat consolidated tendency took a more centrist position. It was influenced by people like Ron Walters, Ron Dellums and Harold Cruse, and led politically by Ron Daniels. Although these folks supported running Black candidates for office, they simultaneously recognized some limits of electoral politics. Their strategy largely saw gaining political power through winning office as the path to Black self-determination. These forces advocated an eventual break with the Democratic Party, but wanted to do it in a gradual manner.
In the aftermath of the convention, the folks who pushed this line found they had few immediate practical differences with the politicians and others more closely tied to the Democratic Party. As a result they increasingly followed policies substantially less radical than the ones adopted at Gary as they worked together in the post-Convention period. One effect of this was to increase the developing marginalization of the disunited left forces as the '70s went on.
The experience of Gary shows how important such conventions can be. It both reflected the mood of the times and helped shape developments in the following years. Electoral politics did become the main vehicle of the Black Liberation Movement. Over the course of the next decade, the number of African American elected officials in the United States jumped from 2,264 to more than 5,000. Areas of Black majority in some parts of the North and South did get elected Black leadership.
Though some gains won in earlier stages in the Black liberation struggle were consolidated at the time, the limitations of this strategy have become all too painfully clear. And as for that "eventual break" with the Democratic Party, events in the '80s--Harold Washington, the Rainbow--did move a ways in the direction of independent politics, for a while. But the break never came, and 25 years after Gary we can sum up that there is a desperate need for a new and very different strategy.

[Gary was the first major town in the United States to elect a black mayor, Richard Hatcher, in 1967. That said something about the town. What happened immediately after, made a much broader point: it said something about America. White people fled Gary after that election, hitting the gas even harder after the country’s first National Black Political Convention was held there in 1972. They took all their money and all their business and went down to Merrillville, 22 miles south, to entrench themselves in a town that once belonged to the peace-loving Potawatomi Indians. (Merrillville’s approximate demographics: 70% white; 22% black, 0.33% American Indian).]
Published by Alan Dixon at 11:30 AM