The 'Great Chain of Being'

The Great Change of Being 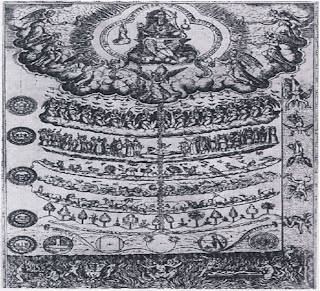 For centuries the ‘great chain of being’ held a central place in Western thought. The Great Chain of Being is a classical and western medieval conception of the order of the universe, whose chief characteristic is a strict hierarchal system. It was first coined by Aristotle and later adopted by Christian philosophers. This view saw the Universe as ordered in a linear sequence starting from the inanimate world of rocks. Plants came next, then animals, men, angels and, finally, God. It was very detailed with, for example, a ranking of human races; humans themselves ranked above apes above reptiles above amphibians above fish. Women were low on this chain of power, and men were on top. In fact, women were below horses; you couldn't live without a good horse, but, you could live without a wife. [Above: 1579 drawing of the great chain of being from Didacus Valades, Rhetorica Christiana]
It is a conception of the world's structure that was accepted, and unquestioned, by most educated men from the time of Lucretius until the Copernican revolution and the ultimate flowering of the Renaissance. The emergence of modern science and the Copernican Revolution is often considered to have dismantled The Great Chain of Being as a worldview. Nonetheless, certain rational metaphysicians, such as Rene Descartes (1596-1650), Baruch Spinoza (1632-1677) and G. W. von Leibniz (1646-1716), created alternate versions of the Great Chain of Being. The Chain of Being is composed of a great, almost infinite, number of hierarchal links, from the most base and foundational elements up to the very highest perfection - in other words, God (in the form of a European Man sitting on a throne). 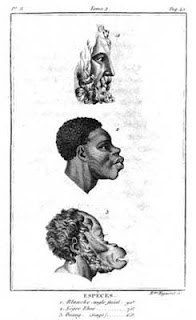 This curious belief is based on the assumption that God is a spirit and that as the spirit descends further into the ‘chain of being’ the less present it becomes. They believed that rocks ranked lower than other beings because rocks were without spirit or life and thus furthest removed from God. This is most likely the origin of European view of the earth as evil and that nothing restrained (European) man from destroying and exploiting it because it was essentially godless.
Based on this scheme it was interpreted that the purpose of the existence of the lower beings of the chain was to serve the higher beings: therefore, plants were used by animals, higher animals ate lower animals, men ate animals and had power over them, and a god had power over men.
In 1677, Dr. William Petty of England announced in a paper to the Royal Society that the missing link between "man" and beast consisted of "savages", beings that fit between Caucasian men and other organisms. Thus, he also naturally concluded that since they were lower on the Great Chain, they were brought into being to serve and follow the will of the beings superior to them. At the time, his contemporaries did not pay much attention to his idea. But fifty years later, Swedish biologist Charles Linnaeus revived his notion (1). Linnaeus came up with this “ highly scientific” chart:

1. Americanus. Native American males were supposedly red; had black hair and sparse beards; were stubborn; prone to anger; "free"; and governed by traditions (3). Thus, this form of Homo sapiens was definitely inferior and uncivilized.
2. Asiaticus. The male Asian was said to be "yellowish, melancholy, endowed with black hair and brown eyes...severe, conceited, and stingy. He puts on loose clothing. He is governed by opinion." Thus, like the aforementioned type of Homo sapiens, the Asiaticus could only be a mediocre prototype (2).
3. Africanus. The male of this subset, according to Linnaeus, could be recognized by his skin tone, face structure, and curly hair (2). This kind was apparently cunning, passive, and inattentive, and ruled by impulse. The female of this kind was also apparently shameless, because "they lactate profusely." (3)
4. Europeaus. The males of this subset were supposedly "changeable, clever, and inventive. He puts on tight clothing. He is governed by laws." (2)
Before Linnaeus proposed the ideas mentioned above, "race" had been used to distinguish between different nationalities. But after he proposed the system above, Europeans began to identify themselves with a larger group: "white" people. 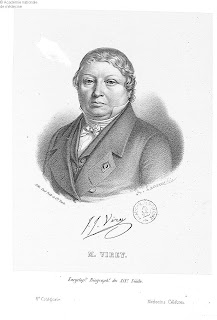 The power of the Great Chain of Being to dehumanize non-Europeans by linking them to lower
forms of life proceeded largely unaffected by the emergence of Darwinism. Some pre-Darwinians, such as the French naturalist Julien-Joseph Virey (left), placed Europeans,
Africans, and apes in a series and casually connected the dots.
"The theorization of the great chain of being was not just for “science” or “fun.” It was a central tool in justifying efforts to colonize, 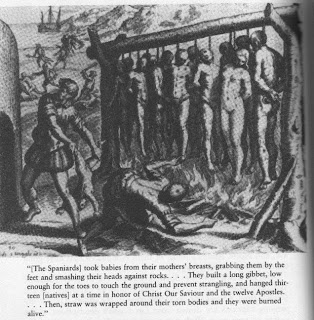 enslave, and even exterminate people. If it could be established that certain kinds of people were indeed less than, even less than human, then it was acceptable to treat them as such." ~ Lisa Wade, Phd.

This imaginary ranking system is the source and at the very heart of racism. As a worldview, it is the antithesis to unity, oneness and the immanence of a creator that exists throughout all.
But in the end one has to wonder, have Europeans disproved their own self serving high ranking of nearness to a just, merciful God, if one were to consider all of the cruelties, crimes, abuses and injustices inflicted on the rest of humankind and the earth as a whole, in their expression of this desired superiority?
Published by Alan Dixon at 8:46 AM

Email ThisBlogThis!Share to TwitterShare to FacebookShare to Pinterest
Labels: Aristotle, descartes, great chain of being

thanks so much this post gave me a lot of important information on the great chain of being. very helpful

DSHE is published the All Subject Class 10 Assignment Answer 2022 for all week on assignment.examresulthub.com.
Want to check the all assignment work and answer, make sure to follow the below subjectwise links:

DSHE is published the SSC Assignment Answer 2021 for Class 10 for three weeks. lets check the assignment work with answer.

I have read the blog and i really like it.
The way you portrait the https://pinoytambayantoday.su blog is outstanding like your work
Best Regards : Pinoy Lambingan