The Harper's Song Pt. I 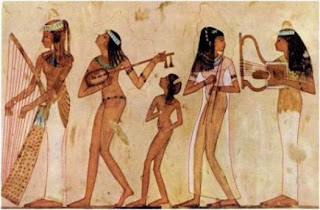 
He is Happy this good prince: Death is a kindly fate. A Generation passes, Another stays, Since the time of the ancestors... None comes from there, To tell of their needs, To calm our hearts, Until we go where they have gone! Hence rejoice in your heart! Forgetfulness profits you, Follow your heart as long as you live! Put myrrh on your head, Dress in fine linen, Anoint yourself with oils fit for a god, Heap up your joys, Let your heart not sink! Follow your heart and your happiness, Do your things on earth as your heart commands! When there comes to you that day of mourning, the Weary-hearted (Osiris) hears not their mourning, Wailing saves no man from the pit! Make holiday, Do not weary of it! Lo, none is allowed to take his goods with him, Lo, none who departs comes back again!
Song from the Tomb of King Intef, c. 2000 BCE. 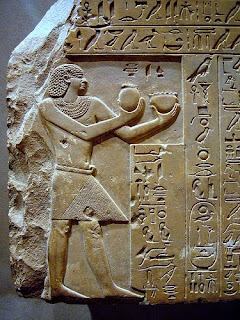 What did the Kemetians (Egyptians) believe about the afterlife? 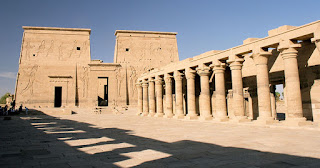 We have been told : "The Egyptians believed that when they died, they would make a journey to another world where they would lead a new life. They would need all the things they had used when they were alive, so their families would put those things in their graves. Ancient Egyptians were buried with their belongings and the tomb walls were painted with scenes from the dead persons life. The objects included furniture, games and even food was placed in the tombs for the long After Life journey!" 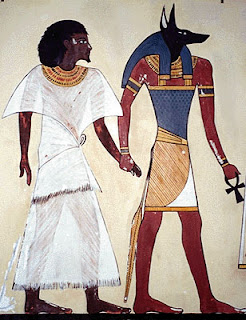 "Once the mummification process was complete, the mummy was carried from the deceased person's house to the tomb in a funeral procession that included his or her friends and relatives, along with a variety of priests. At the tomb entrance, a number of rituals were performed, including the Opening of the Mouth ceremony, in which a priest touched the mummy with various ceremonial tools to restore the dead person's senses and give him or her the ability to receive offerings. Then the mummy was buried and the tomb sealed.[1] Afterward, relatives or hired priests gave food offerings to the deceased in a nearby mortuary chapel at regular intervals." 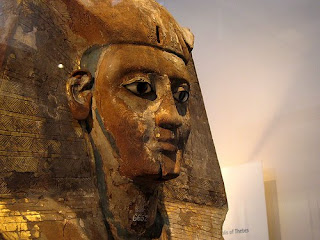 However the phrase "you can't take it with you" - comes from the last line of Harpers song above, relating to King Intef II(pictured here and above being led by Anupu or Anubis). There must be more to the story. Did the average Kemetians not follow the religion of the priests? Was there an understanding that these rituals were symbolic of something spiritual? Did all Kemetian believe the same thing to the same degree?
Published by Alan Dixon at 10:48 AM