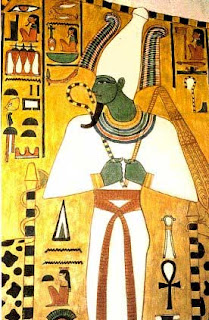 , Asar (Osiris) was depicted as a bearded man, either green or black in color, wearing the Crown of Upper Egypt, and swathed like a mummy. He was described as the "Lord of love", "[H]e Who is Permanently Benign and Youthful", and also the "Lord of Silence". The meaning of the original name Wsjr (Asar), is likely  from wser signifying "the powerful". Moreover, one of the oldest attestations of the neter Asar appears in the mastaba of the deceased as 'Netjer-wser' (God Almighty).
In his hands were a flail and a crook, insignia of the earthly power vested in this dying and rising god. Credited with the introduction of agriculture and several crafts, Osiris was also the initiator of religious rituals, especially the mysteries surrounding the process of embalmment and mummification. The preservation of the body was regarded as essential for eternal life. Without a body there could be no survival after death. In addition to the body the Egyptians acknowledged the existence of a ba and a ka. While the ba was the soul, and pictured as a bird with a human head, the ka acted as a kind of guardian double of the body which was born with it and stayed on as a companion in the world of the dead. At first only the pharaohs became Osirises on death, being identified with the god of the dead as their successors were with Horus, the son of Osiris. 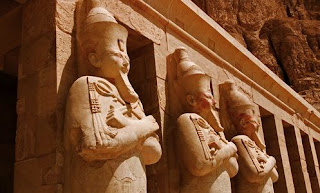 From the third millennium BC onwards all men able to pass the judgement of good and evil might achieve such salvation. Before Osiris and his forty-two assessors stood the scales of judgement, attended by Anpu (Anubis), who placed the soul in the balance against the feather of truth, while the record-keeper Thoth inscribed on his palette the result of the weighing. For the unfortunate waited a monster, part crocodile, part lion, and part hippopotamus: it was Am-mut, ‘eater of the dead’. In Egyptian cosmology the ‘other land’ of the departed was situated on the western horizon, where daily the sun disappeared with its light and life-giving warmth, and from which point descended on the Nile valley not only darkness but the chill winds of the rapidly cooling deserts. In myth Osiris is drowned, dismembered, and scattered over land and water. He was shut in a chest or sarcophagus and dumped in the Nile by his brother Seth. ‘ 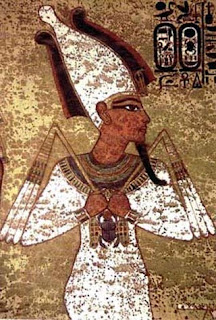 The drowned one’ floated down the river through one of the mouths of the delta into the Mediterranean Sea, and was carried to the port of Byblos. There he was discovered by Isis, his wife and sister, and daughter of the earth god Geb. Out of envy for the happiness of Osiris and Isis arose the undying enmity of Seth, who soon seized the coffin containing the dead god, cut the corpse into more than fourteen pieces, and scattered them throughout the land of Egypt. Again Isis sought her husband and with the assistance of Nut, the mother of Osiris, she resurrected the body, all except his genitals; these had been consumed by fishes. The reborn god, however, did not stay on earth, but became the lord of the departed in the infertile ‘other land’. Another legend suggests Isis buried each piece of Osiris where she found it, thus spreading the potency of the god everywhere. Horus, the son Isis miraculously conceived of the dead god, was to be the avenger.As a prototype of the resurrected dead man, Osiris and his cult spread widely, and during the Roman Empire assumed the form of a major religious sect in many provinces. 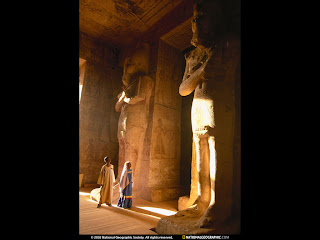 One view of the origin of the myth is that the god was an historical king who at a remote period reigned over Egypt from his capital in the delta. His violent death could have been the result of an insurrection by Ombos, the city sacred to Seth in Upper Egypt. The divided kingdom according to this version was reunited by the king's son, deified as Horus, who slew the rebellious Seth.

According to legend he taught his people the three foundations of civilization: the skills of agriculture, how to sow and reap; the laws of government, how people must rule themselves; the necessities of participation in creation, how to worship the Gods. In all these things, Isis, his sister and wife, accompanied him.Osiris taught the people of Egypt to domesticate cereals like emmer, durum, kamut, barley and sorghum. A plentiful crop of these cereals on the fertile flood plane of the Great River ensured the people's survival year after year. The river valley with its black soil was the ideal medium for agriculture. The Nile's annual flood deposited a new layer of nutrient-rich silt on the fields. When the flood receded, the fields were ready. Every man woman and childparticipated in preparing the field with the plough and the hoe and then sowing the seed. They even drove their hoofed animals to trample the seed into the ground, then spent two months nurturing the new growth. They also had to protect the grain fields by guarding them against both wild and domestic animals. Then came the reaping, another fully communal activity, followed by winnowing and storing.The rules of government were mostly abstract concepts that fully balanced the physical activities required by agriculture. Government, Osiris taught the people, depends on the triune principles of Sia, Hu and Ma'at.

Sia is the Understanding that all things are related in the sense that everything participates in the existence of everything else. Sia is the Perception of how an individual's thoughts, words and deeds, whether she is a washerwoman or he is a king, affect everyone else. The first responsibility of governance was to ensure that relationships among people remain open and measured.

Hu represents that thought, word or deed that comes after long deliberation: how will that thought, deed or word benefit both the self and the community? Hu is also the Manifest Activity that infuses the practical, proven habitual words and interactions of all people so that no one will be harmed by the individual's thoughts, words, or deeds. Hu is finally the Authoritative Utterance that comes intuitively from an individual's ancestor, or even from the King himself directly into the ears of the people, reflecting the collective wisdom of the community and the greater good of the whole land.

Ma'at is the resulting social Order, the overall divine Harmony within which all people and things function. Ma'at is the Righteousness of an act or a collective action that benefits everyone; Ma'at is the Truth of an utterance that is readily perceived by the community; Ma'at is a sense of Justice that urges an individual to live in harmony with himself, his family, his village, in fact, with all creation.
Published by Alan Dixon at 9:52 AM

I thank you for the information and articles you provided