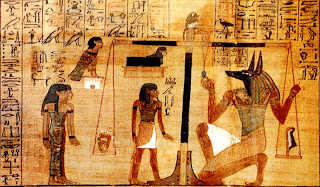 More than 3,500 years ago our ancestors in Kemet (Egypt) came up with a doctrine - Ma’at (Muh-aht) which was a concept of sustained truth, balance, order, law, morality, and justice.
A component of Ma’at is the 42 Negative Confessions which are statements of principles for the everyday
person to keep in mind and strive to achieve. These principles are known as "Negative Confessions" because they usually begin with a negative statement, and are simply affirmations of acts one has avoided in his life as he strives to live by Ma'at.
They were very similar and most likely, seminal to the laws of Moses that we are currently familiar with (Moses according to tradition, was raised in Egypt). Among them are the statements- "I have not stolen or robbed with violence"; "I have not done murder"; "I have not defiled the wife of any man", etc.


Today our focus is on confession number 34 - "I have not fouled the water".


There’s not much else to say- except noting that after at least 9,000 years of human civilization, Europeans in the 17th Century encountered an earth that was essentially pure and undefiled, from the rivers and lakes to the forests and the plains. Their thanks to the people who consciously left them with this gift was to call them primitive, savage and incapable of development. ~ Thanks.

Published by Alan Dixon at 8:45 AM