The Moors of Spain 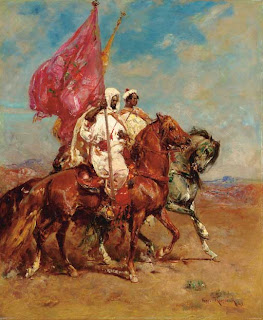 The original Black Berbers, who were called Moors, were the North African ancestors of the present day dark brown/black people of the Sahara and Sahel, mainly those called Fulani, Tuareg, Sanhaja, Kunta, as well as the Trarza of Mauritania and Senegal, and various tribes presently living in Chad, Morocco and Algeria. 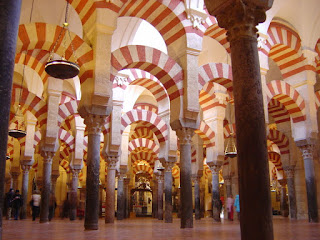 Tariq ibn Ziyad, a commander of the Moorish army led the first conquest into Spain by Muslims in 711 A.D. On April 30, 711, Tariq landed on the Spanish Coast with 7,000 troops. His troops consisted of 300 Arabs and 6,700 native Africans (Moors). An early source, Ibn Husayn (ca. 950), recorded that these troops were "Sudanese", an Arabic word for Black people.

He seized a great cliff and an area surrounding it and there established a fortress. This cliff was called Gibraltar - from the Arabic Jibal Tariq (mountain of Tariq). Toledo, Spain was actually handed over to the invading Tariq by the Jews of that city who, like many other people of Spain, saw Tariq and his troops as deliverers from the tyranny of the Visigoths. 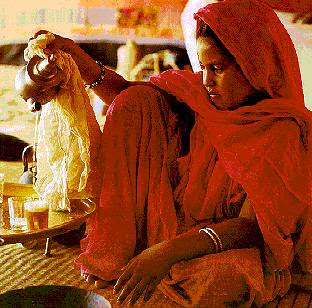 When the Arab rulers later arrived, the hardest part of the job had been done. Instead of treating the Moors fairly, the Arabs assigned themselves the most fertile regions. The dissatisfied Moors were not long in coming to blows with the Arabs. (The History of Spain by Louis Bertrand and Sir Charles Petrie - published by Eyre & Spottiswood, London, 1945, page 36). Ultimately, the Moors acquired two-thirds of the peninsula, which they named Al- 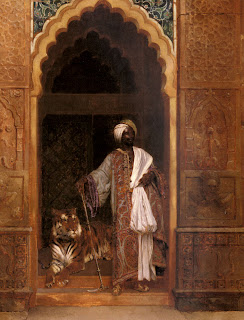 Al -Andulus had been obliged to pay tribute to the Arab Caliph (King) of Damascus, but as Al-Andulus acquired its own identity, its bond with the Caliph began to weaken. In 756, Al-Andulus proclaimed itself an independent state. Thus, its only links to the Arabs would be the Islamic faith and the Arabic language.

In Spain, the Moors would build one of the most beautiful and astonishing civilizations in history. Moorish culture was a composite culture as the Moors acquired knowledge from both East and West. Because Islamic Civilization was a complex of many different nations and cultures, the Moors were able to draw knowledge from the science and philosophy of ancient Egypt, Cush, Akkad, Hebrews and Greeks and learn from the contemporary cultures of Chin 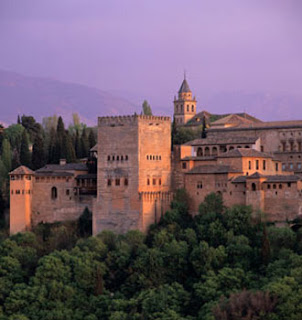 a, India and Persia. Eventually, Moorish Spain became a cultural and intellectual Mecca where all the great manuscripts and learned texts were collected, translated and classified, and where scholars from far and wide could gather to study them.
The Moors developed farming, the arts, sciences and beautiful cities with magnificent buildings, gardens, streets and a culture and civilization far surpassing that of the rest of Europe at that time. The city of Cordoba, under their administration, had more than 200,000 houses and over a million inhabitants. At night, one could walk through it in a straight line, along paved streets, for ten miles by the light of public lamps. Seven hundred years after this time there was not as much as one lamp in London. According to one historian, Cordoba had 471 mosques, 70 libraries and 300 public baths. There were upwards of 80,000 shops. Water from the mountains was distributed through every corner and quarter of the city by leaden pipes into basins of different shapes, made of the purest gold, the finest silver, or brass plates as well as into pools and fountains. The houses of Cordoba were air conditioned in summer by, “ingeniously arranged draughts of fresh air drawn form the garden over beds of flowers, chosen for their perfume, warmed in winter by hot air conveyed through pipes embedded into the walls. 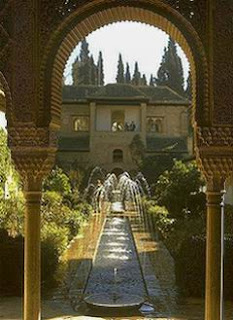 The Moors had been able to create a harmony in the rhythms of life in the city and the countryside. They kept the surrounding countryside fertile and productive with advanced drainage and irrigation systems, reservoirs, aqueducts, sophisticated storage facilities and efficient marketing and trading networks. The Moors also brought the countryside into their cities with fantastic gardens, parks, lush inner courtyards and a constant supply of pure water.
In the field of science the Moors also made terrific advances.


"This is a crucial period in the history of world civilization that many historians have intentionally glossed over. "

However, some did not. Robert Briffault writing in the Making of Humanity, explained:

The debt of our science to that of the Arabs does not consist in startling discoveries or revolutionary theories, science owes a great deal more to Arab culture, it owes its existence. The astronomy and mathematics of the Greeks were a foreign importation never thoroughly acclimatized in Greek culture. The Greeks systematized, generalized and theorized, but the patient ways of investigation, the accumulation of positive knowledge, the minute method of science, detailed and prolonged observation and experimental inquiry were altogether alien to the Greek temperament. What we call science arose in Europe as a result of a new spirit of inquiry, of new methods of experiment, observation, measurement, of the development of mathematics, in a form unknown to the Greeks. That spirit and those methods were introduced into the European world by the Arabs (Moors).
Arabic poetry was crafted, above all, for recital and song. Its lyric forms, zajal and muwashshah, some say, inspired the first ballads of the European troubadors. The soul-stirring adagios of cante jondo, the deep song of Gypsy flamenco, still trace moods and rhythms to this lost age. 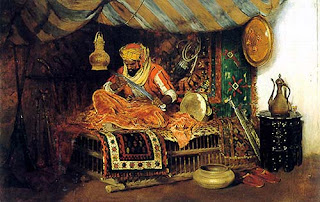 Miles Davis: "The Black Moors were over there in Spain because Africans had conquered Spain a long time ago. In the Andalusian area you have alot of African influence in the music, architecture and in the whole culture...So you had a black African thing up in the feeling of the music in the bagpipes, trumpets and drums."-From "Miles: The Autobiography".

The civilization of the Moors created an intellectual climate that served as a beacon for Europe, when Europe stumbled in darkness. The Islamic Scholars brought the works of 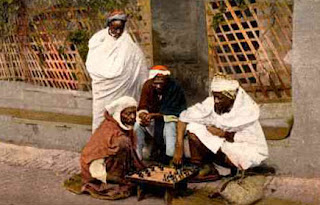 Dynastic Egyptian and Classical Greek back to Europe by translating into Arabic the Greek texts of Aristotle, Plato, Ptolemy, Euclid, Galen, Hippocrates and others. They analyzed and improved upon these works, drawing from their wide-ranging intellectual experiences and observations in the vast territories they ruled.
Professor Thomas T. Hamilton of Old Dominion University made this point clearly when he stated:

"Between the middle of the Eighth and the beginning of the Thirteenth centuries, the Arabic Speaking people (Moors) were the main bearers of the torch of civilization throughout the world, and were the medium through which ancient science was recovered, supplemented and transported throug 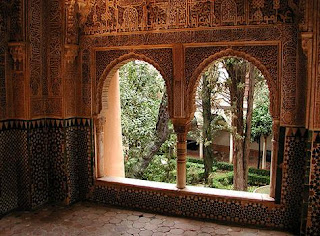 h Africa, Spain, Sicily in such a way as to make the Renaissance possible."

Toledo, Cordova and Seville were the centers of Moorish culture and science. Students from many countries in Western Europe would visit the Moor’s Universities to learn mathematics and astronomy. After Toledo fell in 1085, to Castilian forces, this city became the focus of a major translation effort, where teams of translators translated thousands of texts from Arabic into Latin. By 1200, Europe had recovered much of ancient science as well as appropriating several centuries of scientific, medical and philosophical works written by Muslim scholars. 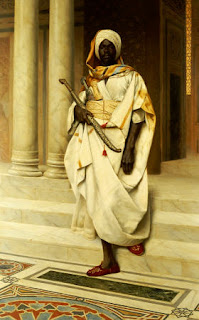 The Christian kingdoms in the north started gradually to "reconquer" Spain.
The so-called Reconquista - a seven-and-a-half century long process by which Catholic Christians conquered the Iberian peninsula (modern Portugal and Spain), eliminated the Muslim and Moorish states of Al-Ándalus. It was not really a "Reconquest" since Spain had never been Catholic - the Visigothic brand of Christianity had been Arian.


On January 2, 1492, the last Muslim ruler, Abu 'abd Allah Muhammad XII surrendered to Queen Isabella of Castile and King Ferdinand II of Aragon. Ferdinand and Isabella now ruled Granada.
1492 was a pivotal date. Secure in its borders Spain now funded sea expeditions such as that of Christopher Columbus the same year. Following the Christian victory, Muslims and Jews were given a choice of exile, conversion or death. So many left that within a few years the economy would collapse. 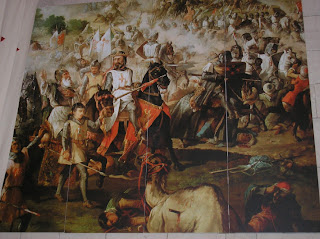 Most Muslims and Jews were forced to either convert to Christianity or leave Spain and Portugal and have their assets seized. Many Muslims and Jews moved to North Africa rather than submit to forced conversion. The Christian hierarchy demanded heavy taxes and gave them nominal rights, but only in heavily Islamic regions, such as Granada, until their own power was sufficient, and the influence of the Inquisition strong enough, to make further expulsion both possible and economically feasible.


Seven hundred years of Moorish influence left an unmistakable mark on Spain, making it markedly different even today from the rest of Western Europe. The Moors not only brought their religion, but also their music, their art, their view of life, and their architecture.
Published by Alan Dixon at 5:53 AM

ROFLMAO.
I like the fact that not one source is attributed to this nonsense.
Moors had Black slaves.
Some were freed and adopted the Muslim faith as Black slaves did all over the world.
This is hilarious.

@Tuco Benedicto Pacifico Juan Maria Ramirez: I think you (intentionally?) overlooked about 5 sources mentioned in the article.
It sounds like your real issue is the actual history rather than it's sources. Nevertheless here are some more:
When the Moors Ruled Spain
by Thomas J. Abercrombie
National Geographic
Vol. 174, No. 1, July 1988; Golden Age Of The Moors, 1992 / Edition 1
by Ivan Van Sertima (Editor);Montgomery, Watt W., “A History of Islamic Spain,” University Press of Edinburgh, 1992.

about slavery, it was not a matter of color skin, unlike occidentals for instance. They had white slaves as well.
But I think it is not a significant fact that can reflect the overall history, and contribution of who you call 'moor',
they were Arabs a lot, but not only, they were all muslims.
And this lands of Spain ruled by them,
was the extreme western part of the Islamic Khilafa.
Islamic Khilafat wich emerged few hours after the death of the prophet of Islam.
Another thing we can notice, wich is maybe out of this tread, is that expansion of the Khilafa was not stopped in Spain,
but in France, in Poitier (Ommeyade loosed against a franc coalition of Charles martel)
Anyway, it is alway as pleasure to read such part of history, wich is usually hidden because of the actual hate against Islam and muslims.
thank you for your contribution.

The information you have posted is very useful. The sites you have referred was good. Thanks for sharing.. Check out
cast a shadow
delete photo background online
Neck Joint

When You use paintings or sculptures or photographs to illustrate your writing ,please ad the name of each artist under his or her work! Thanks