The Truth Regarding King's Murder 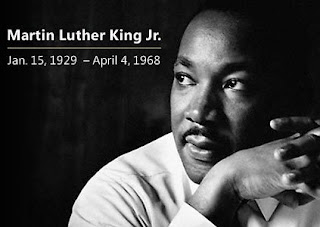 Maybe that title is unneccesary because, well... who needs the truth when we have the "official story"?

The official story is that James Earl Ray a racist, ex-con killed King and that he acted alone. Now, essentially, the mainstream maintains that if you
question their 'official story', you are a conspiracy theorist -or worse, you are against the government. This is the same logic we have recently heard from George Bush, "either you're with us or you are with the terrorists." Wow, what a bind to be in. So most of us simply ignore what happened and all the evidence that exists outside of the inexplicably narrow official story. But that evidence has been mounting - considerably. Or maybe we aren't aware of the evidence because the mainstream media has done a superb job of keeping it below our radar.

It is hardly known that according to a Memphis jury's verdict on December 8, 1999, in the wrongful death lawsuit of the King family versus Lloyd Jowers "and other unknown co-conspirators," Dr. Martin Luther King Jr. was assassinated by a conspiracy that included agencies of his own government. Almost 32 years after King's murder at the Lorraine Motel in Memphis on April 4, 1968, a court extended the circle of responsibility for the assassination beyond the late scapegoat James Earl Ray to the United States government.

How long shall they kill our prophets while
we stand aside and look? -
Bob Marley 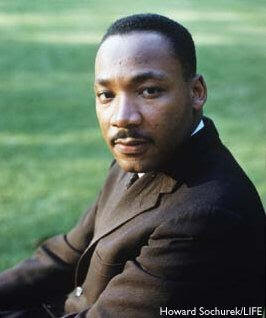 So what if based on the outcome of this trial we
have questions? Let's say we have no grand conspiracy concocted but just questions regarding some things the official story doesn't even attempt to explain or consider such as:

1. Why did Loyd Jowers the owner of Jim's Grill in Memphis come forward and state that he had been asked to help in the murder of King and was told there would be a decoy (Ray) in the plot?

(Jowers said the man who asked him to help in the murder was a Mafia-connected produce dealer named Frank Liberto. Liberto, now deceased, had a courier deliver $100,000 for Jowers to hold at his restaurant, Jim's Grill, the back door of which opened onto the dense bushes across from the Lorraine Motel. Jowers said he was visited the day before the murder by a man named Raul, who brought a rifle in a box.)

2. Why did store owner John McFerren say when he arrived around 5:15 pm, April 4, 1968, for a produce pick-up at Frank Liberto's warehouse in Memphis he overheard Liberto on the phone inside saying, "Shoot the son-of-a-bitch on the balcony." ?
3. Why did an FBI agent admit the agency called King to urge him to stay at the Lorraine, a black owned motel instead of the white owned (more secure) Holiday Inn where he had stayed before? 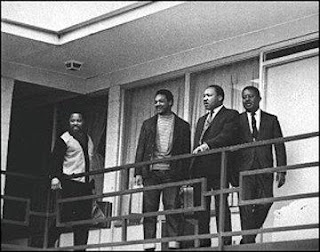 5. Who made him change his room from a secluded ground floor room to the second floor balcony space?

7.Why were the only two black firefighters temporarily transferred from that location on Apr. 3?

9. Why was there testimony of two rifles, one that was found in a bundle behind the rooming house and one witnesses say Loyd Jowers retrieved from the actual shooter, still smoking, which he broke down and disposed of? 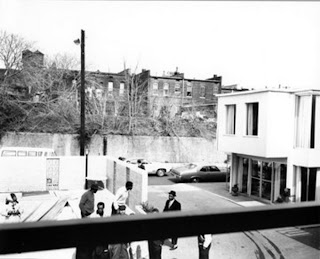 10. Why didn't the FBI ever do a ballistics test matching the slugs taken from King's body with the rifle attributed to Ray? (Judge Joe Brown, who had presided over two years of hearings on the rifle, testified that "67% of the bullets from my tests did not match the Ray rifle." He added that the unfired bullets found wrapped with it in a blanket were metallurgically different from the bullet taken from King's body, and therefore were from a different lot of ammunition. And because the rifle's scope had not been sited, Brown said, "this weapon literally could not have hit the broad side of a barn." Holding up the 30.06 Remington 760 Gamemaster rifle, Judge Brown told the jury, "It is my opinion that this is not the murder weapon.")

12. Why did Loyd Jowers testify that immediately after the killing, MPD Lieutenant Earl Clark (the MPD's best marksman), now deceased, came out of the brushy area and give him a smoking rifle at the rear door of his restaurant, Jim’s Grill?

13. Why did Several witnesses at the 1999 trial testify that they saw two men running away from the brushy area, one burning tires as he drove away in a green 1965 Chevrolet past a police car that took no notice, another getting into a police car and being driven away? (The official story has always been that nobody shot from the bushes but that James Earl Ray fired from a bathroom window of the rooming house.)

14. Why did Olivia Catling who lived a block away from the Lorraine on Mulberry Street after hearing the shot claim that "the shot came from that clump of bushes," indicating the heavily overgrown brushy area facing the Lorraine and adjacent to Fire Station 2?

15. Why did Earl Caldwell a New York Times reporter staying at the Lorraine Motel on the evening of April 4, in a videotaped testimony, after hearing the shot, say he saw a man crouched in the heavy part of the bushes across the street? The man was looking over at the Lorraine's balcony.

16. Why did the Memphis Police and the FBI ignore Earl Caldwell's and any testimony that contradicted the belief that Ray fired from a bathroom window of the rooming house across from the Lorraine? (Caldwell:"I will always remember the puff of white smoke and the cut brush and having never been given a satisfactory explanation. "When I tried to tell the police at the scene as best I saw they told me to be quiet and to get out of the way. I was never interviewed or asked what I saw by any law enforcement authority in all of the time since 1968.")

Of course there are tons more questions. Over 70 witnesses at the 1999 Civil trial gave testimony.
But the myth of James Earl Ray, the lone gunman remains. Part of this is the belief that he 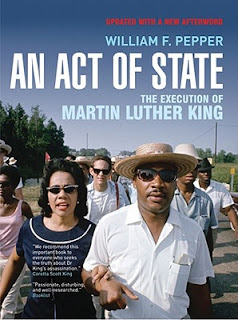 Every story, and I mean every story, about Ray over the years by the media has begun with the same phrase:

"James Earl Ray, the confessed killer of Dr. Martin Luther King, Jr. . . . "
But Ray actually pled guilty (after 3 days of coercion by his attorney.)
Pleading guilty and a voluntary confession are two completely different concepts - of course with a confession comes more details about what, how and why events happened. Ray never provided any of these (days later he even re-canted his guilty plea).

Let's see how much of this is discussed today.

Published by Alan Dixon at 5:50 AM

Awesome job, ASD!! Learned quite a few new things. Thanks for posting, kid.

This is a list of very good evidence questions, leading convincingly up to the very Big Question of today's blog.

An even larger Big Question is why over a short span of years a lot of major American progressive leaders all got assassinated. And why did they all happen to get assassinated by conveniently obscure folks with no obvious Right Wing stated reason for killing all those Left/Progressive leaders?

John Kennedy, Robert Kennedy, Malcolm X, Martin Luther King, and, lingeringly, John Lennon, are the guys I have in mind.

The 1960s/1970s can be seen in light of what's happened since as having been (by US standards) a very high water mark for progressive politics--high enough to have made a lot of powerful interests on the Right very nervous and very angry.

Above all, our Owners of Capital, and therefore the government they effectively control, like to see us all calmly working and making money for them, not making trouble.

If this pattern of dramatic "peaking" of one political tendency, followed by a rapid series of cookie-cutter assassinations of the leaders of same, were presented in a history book about some other country, most of us would draw the reasonable conclusion right away.

Keep up the good work!

Good day! I simply wish to give an enormous thumbs up for the great info you’ve got right here on this post. I might be coming back to your blog for more soon.

I will probably be coming again to your weblog for more soon.

The next occasion Someone said a blog, Lets hope which it doesnt disappoint me around this. I am talking about, I know it was my solution to read, but I personally thought youd have something intriguing to say. All I hear is often a number of whining about something that you could fix should you werent too busy in search of attention.

I went over this website and I believe you have a lot of excellent information, bookmarked (:.

Yet another interesting comment, thanks a lot. I’ve made a point of reading some other stuff you made and I you’ve got some nice content. Cudos.

I’ve been exploring for a little for any high-quality articles or blog posts on this sort of area.

Great write-up. I am a normal visitor of your web site and appreciate you taking the time to maintain the excellent site. I will be a frequent visitor for a long time. buy expired domains

I had no trouble navigating through all the tabs and information was very easy to access.