A Myth Of Epic Proportions

Racialy speaking, what is a Caucasian? There's no such thing.

Caucasians are a mythical race of people invented by German philosopher and 'historian' Christoph Meiners.
We have all been told, or have all assumed, that there was some historical significance to the term 'Caucasian race'…but there is none.
Meiners is considered an early practioner of scientific racism. A pioneer in that lofty profession of categorizing and demeaning different groups of people around the world while conveniently placing white people at the top of a supposed hierarchy.

It's called scientific racism but it's a little light on the scientific side. Try to find the science:


"The Caucasian race” was coined by the German philosopher Christoph Meiners in his 'The Outline of History of Mankind' (1785). In Meiners’ unique racial classification, there were only two racial divisions (Racen): Caucasians ('white and beautiful') and Mongolians ('brown and ugly')."


He considered Caucasians to be more physically attractive than Mongolians, notably because they had paler skin; Caucasians were also more sensitive and more morally virtuous than Mongolians. Later he would make similar distinctions within the Caucasian group, concluding that the Germans were the most attractive and virtuous people on earth. (Meiners just happened to be German). The name "Caucasian" derived from the Southern Caucasus region (or what is now the countries of Armenia, Azerbaijan and Georgia), because he considered the people of this region to be the most physically attractive.


(Meiners also claimed the Negro felt less pain than any other race and lacked in emotions. Meiners wrote that the Negro had thick nerves and thus was not sensitive like the other races, he went as far to say that the Negro has “no human, barely any animal feeling” he described a story where a Negro was condemned to death by being burned alive, half way through the burning the Negro asked to smoke a pipe and smoked it like nothing was happening while he continued to be burned alive.)

Meiners' term was given wider circulation in the 1790s by Johann Friedrich Blumenbach, a German professor of medicine and member of the British Royal Society, who is considered one of the founders of the discipline of anthropology.
He noted: "Caucasian variety—I have taken the name of this variety from Mount Caucasus, both because its neighborhood, and especially its southern slope, produces the most beautiful race of men, I mean the Georgian; and because all physiological reasons converge to this, that in that region, if anywhere, it seems we ought with the greatest probability to place the autochthones (original members) of mankind."1


Blumenbach also held to the "degenerative hypothesis" of racial origins. Blumenbach claimed that Adam and Eve were Caucasian (Georgian) inhabitants of Asia, and that other races came about by degeneration from environmental factors such as the sun and poor diet. 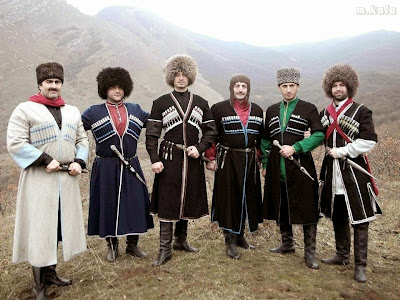 Georgian men in their traditional dress

Now, we are told that race is only a social construct and then we are told 'it's better not to bring up race'. So the construct basically remains. Racism is built into the walls of the social structure in which we live or rather it is the walls themselves.
Why after over 200 years has this never been brought to light  (in the mainstream) and clarified? Why not expose and drop the use of the term 'Caucasian?'

Now imagine if black people tried to name themselves.  It would be the subject of mainstream debate, historical scrutiny, academic investigation, critique and derision.  Imagine if our chosen name was based on, "we are really good looking and other races are really ugly."

Why has the origin of 'Caucasian' never been discussed?

The reason is because there is a cultural war going on. That's what racism is. It's people saying 'our culture is better than yours'.
We wonder why, although nothing is ever spelled out explicitly, our children always end up picking up the white dolls in experiments - no matter what year it is, 1959, 1999, or 2009.

"Our culture is better than yours" is built into most Western institutions, just as it's built into the definition of "Caucasian". It's also unsustainable. Many spiritual cultures from ancient times expressed the fact that all human beings are interconnected parts of a whole. What hurts one, hurts all; what benefits one benefits all. Beauty manifests in creation in many different ways, so to establish a 'scientific' hierarchy based on what is 'attractive' and what is 'ugly' is...well...interesting.

We may not know or fully understand what would make Meiners and scores of generations following him think this is an acceptable way to view the world, but we will never understand by anything by ignoring it.