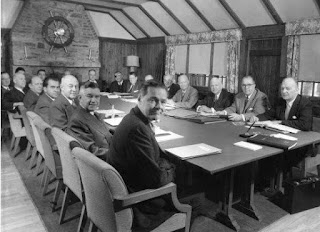 Vice President Nixon observed, "Some of the peoples of Africa have been out of the trees for only about 50 years," to which Budget Director Maurice Stans (who would later be Nixon's commerce secretary) replied that he "had the impression that many Africans still belonged in trees." The president [Eisenhower] did nothing to elevate the discussion, remarking with assurance that in Africa "man's emotions still have control over his intelligence." * 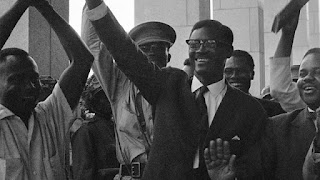 Three years later, in 1960 after Patrice Lumumba, the Congo's first democratically elected leader took office as Prime Minister vowing to make the Congo "the pride of Africa,"Eisenhower in another NSC meeting gave direct approval to have him "eliminated." 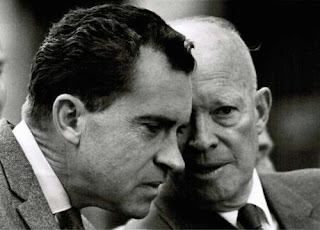 *On other occasions, Eisenhower expressed resentment when he had to invite "those niggers" - by which he meant African dignitaries- to diplomatic receptions.

“We shall eradicate all discrimination, whatever its origin, and we shall ensure for everyone a station in life befitting his human dignity and worthy of his labour and his loyalty to the country.
We shall institute in the country a peace resting not on guns and bayonets but on concord and goodwill…
I ask you all to sink your tribal quarrels: they weaken us and may cause us to be despised abroad.
I ask you all not to shrink from any sacrifice for the sake of ensuring the success of our grand undertaking.
I call on all Congolese citizens, men, women and children, to set themselves resolutely to the task of creating a national economy and ensuring our economic independence…
Long live independence and African unity!
Long live the independent and sovereign Congo!"

Published by Alan Dixon at 2:33 PM