For well over fourteen hundred years Africans have been living Islam. They have used it to inform their African dress, music, diet, social structures, their self governance, their learning and sciences. By their own volition Africans have been Muslim for approximately as long as Anglo Saxons and Germans have been Christian. This heritage runs deep. Most of the great West African Empires and cities were Muslim, including Timbuktu, Djenne, Ghana, Mali, Songhai, Fouta Djallon, the Sokoto Sultanate in Nigeria and Niger, and Kanem-Bornu; not to mention the powerful East African States such as the Ajuran Empire, the Adal Sultanate and the Mahdiyya in Sudan.  When Africans were brought to America their connection with this past was  essentially cut off. We had no clue all this had been going on.
As awareness grew in the 1960's and '70's, many African Americans began to reflect this awareness in their  their thinking as well as in their names. Then something happened in the early 90's. The paragraph below is a reflection of the change. This article will examine the single paragraph below by Chancellor Williams.

"The Blacks in the United states seem to be more mixed up and confused over the search for racial identity than anywhere else. Hence, many are dropping their white western slave master's names and adopting - not African - but their white Arab and Berber slavemaster's names! For the Arabs themselves are a white people, the semitic division of Caucasian and therefore blood brothers of the Jews against whom they are now arrayed for war." 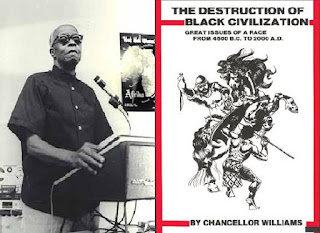 Ok, let's start with the first two sentences. "The Blacks in the United states seem to be more mixed up and confused over the search for racial identity than anywhere else. Hence, many are dropping their white western slave master's names and adopting - not African - but their white Arab and Berber slavemaster's names!"

Are we really mixed up about our 'racial identity'? We're black,(or "blacks" as Chancellor said.) It's that simple, because "racial identity" is a simple, superficial category and it is as vague as it is simple. Because as we all know race and blackness are social constructs that can mean a lot of things, depending on an individual's perspective, presumptions, and the norms and stereotypes of the society at the time. 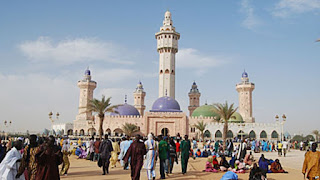 But we are not simply a race, we are a people, an African people with an array of distinct cultural, historical and ethnic lineages and heritages. Many of them go back to the Fulani, the Wolof, the Soninke, the Jallonke, the Mandinke, the Jakhanke, the Mandé etc. The majority of these people have been Muslim for as long as their oral histories can recall, approximately one thousand years. They have names like Karim, Malik, Kadir (Qadir), Fatima, Khadijah or Amina.

So, if I, for example, through DNA, trace my lineage back to Mali, and find many people in my region are named Kadir and I change my name to Kadir, how exactly am I mixed up? Am I not re-connecting with my actual heritage? Am I mixed up because Kadir is originally an Arabic word? If that's the case Williams should take that up with the people of West Africa and forty seven generations of our ancestors there who have been Muslim and have used Kadir and similar names. 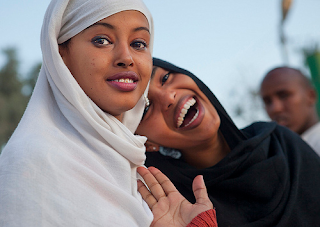 And further, how is that different from a European-American naming himself Michael*, Joseph, John*, or James? Those are all originally North African, Middle Eastern, Hebrew/Aramaic names.  (*Ex. Michael from Hebrew:  Mīkhāʼēl מִיכָאֵל "like *El" (the *Powerful One) and John, from Yohanan (יוֹחָנָן‎), "Graced by Yah").
Not to mention that Arabic (along with Hebrew and Ancient Egyptian) is an Afroasiatic language with an ancient prototype that originated in Ethiopia. Chancellor Williams may not have known this during his time, but now we know. 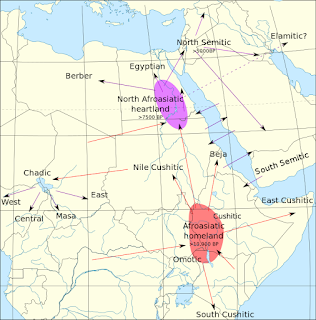 Next he says, we are- "adopting our white Arab and Berber slavemaster's names!"


First, plain and simple, not one of the African empires, nations and people in history had an 'Arab slave master.' They were a free and independent people. Although slavery did exist, the overwhelming majority of Africans weren't sold or taken as slaves by Arabs, and the vast majority of Arabs didn't buy or take slaves, so why would this be the defining theme when referring to 'Arabs' or Muslims?
(The answers lies in the motives and biases of 18th and 19th century Western Christian Orientalist scholars, but we'll discuss that later.)
See also, http://www.innercivilization.com/2017/12/islam-black-people-and-slavery-pt-1.html 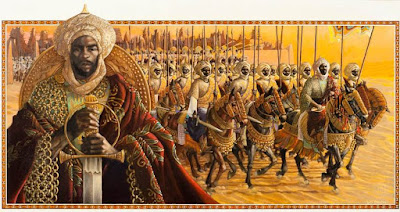 Third, and probably most importantly. The huge assumption in this paragraph made by Williams is that we took on these names simply to rebel against the 'white slave- master' or purely for cultural identity or socio-political reasons. While those may be factors, the central reason was because of their spiritual significance and meaning. This is aptly explained by Elijah Muhammad, the one man primarily responsible for the adoption of these names. 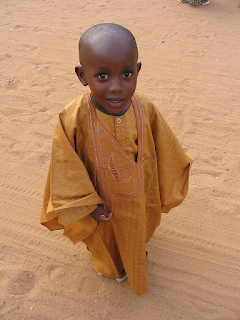 "The Black man from the root beginning is from a Black Father. The Black man (so-called American Negro) is a member of the family and a direct descendant of the Creator who made the Heavens and the Earth. Therefore the son should be called by the name of his Father and not called by the name of an alien. The white race is an alien people to the Black Man. So many times you have heard that God has 99 names or attributes. The 100th name or attribute is Allah. Many of his attributes refer to names such as Power (Qadir), The Mighty (Al Aziz) , The Wise (Al Hakim) , the Most Merciful (Ar-Rahim), The Maker (Al-Bari), the Fashioner (AL Musawwir), the Knower (Al-Alim), the All -Hearing One (As-Sami), the All Seeing One(Al- Basiyr). So many of these names that we should have are pertaining to our Father."

This is the same as assuming Africans throughout the centuries were forced to convert to Islam at sword point or that they had to convert to do business. The problem is that (aside from ignoring the actual history) this view ignores the agency, and undermines the dignity, of the African mind. Islam spread to Southeast Asia, Iran, India, Afghanistan, etc., yet we don't assume they were forced to convert. Why when it comes to our own African people we assume they were victims and not intelligent, conscious actors with their own sense of determination and preferences? What Western scholars and their students have overlooked is the possibility that Africans appreciated the principles and the aesthetics of the Qur'an as well as the way it sounded to their ears and to their hearts. In fact, the word 'baneex' in the West African Wolof language, meaning pleasure and satisfaction, is traditionally used to describe the experience of learning the Qur'an.

Finally, let's deal with the last sentence in William's paragraph:  "For the Arabs themselves are a white people, the Semitic division of Caucasian and therefore blood brothers of the Jews against whom they are now arrayed for war."

To begin with, this phrase 'semitic division of Caucasian' has no valid meaning in current anthropology. Semitic is not a race.* It is more of a language designation, now called Afroasiatic because it originated in Africa and eventually branched into Asia.  Caucasian is a false category. It's a fabrication made up by 18th Century Europeans and has no real scientific meaning. See, http://www.innercivilization.com/2014/11/a-myth-of-epic-proportions.html .

'Arab' is not a race either. There have been a number of different ethnic groups on the Arabian peninsula. But we do know the original Arabs were black. 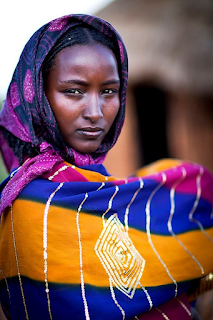 Here's a description of the Arabs from an early source, before the Northern Saudi takeover.

"They are African in character, often in identity. Indeed, the dialect commonly used along the south-eastern coast hardly differs from that used by the Somali Africans on the opposite shore. it is remarkable that where the grammar of the Arabic, now spoken by the “pure” Arabs, differs from that of the north, it approaches to or coincides with the Abyssinian.
The pre-Islamitic institutions of Yemen and its allied provinces-its monarchies, courts, armies, and sergs-bear a marked resemblance to the historical Africo-Egyptian type, and even to the modern Abyssinian. The physical conformation of the pure-blooded Arab inhabitants of Yemen, Hadramaut, Oman, and the adjoining districts-the shape and size of the head, the slenderness of the lower limbs, the comparative scantiness of hair, and other particulars- point in an African rather than an Asiatic direction. The general habits of the people,-given to sedentary rather than nomad occupations, fond of village life, of society, of dance and music; good cultivators of the soil, tolerate traders, moderate artisans, but averse to pastoral pursuits-have much more in common with the inhabitants of the African than with those of the western Asiatic continent. The extreme facility of marriage which exists in all classes of the southern Arabs with the African races; the fecundity of such unions; and the slightness or even absence of any caste feeling between the dark “pure” Arab and the still darker native of modern Africa-conditions different from those obtaining almost everywhere else-may be regarded as pointing in the direction of a community of origin.”
ORIGIN OF THE ARABS – ENCYCLOPEADIA BRITANNICA 1902

“The original inhabitants of Arabia…were not the familiar Arabs of our time but a very much darker people.  A proto-'negroid' belt of mankind stretched across the ancient world from Africa to Malaya.  This belt…(gave) rise to the Hamitic peoples of Africa, to the Dravidian peoples of India, and to an intermediate dark people inhabiting the Arabian peninsula.
Bertram Thomas, Cambridge educated historian and Finance Minister, reported in his work ‘The Arabs" (New York, Doubleday 1937). 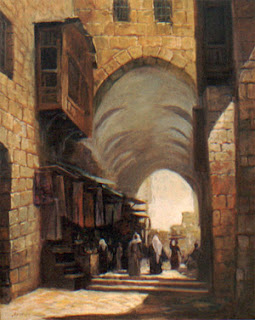 What about the Arabic language? This is the heart of the matter. Those names Chancellor Williams was concerned with were Arabic, so where do these names and the language originate? The answer is Africa, plain and simple. The spoken language is older but the written forms can be traced back to the 9th century B.C. See below:

This becomes more clear when comparing Arabic with some of the words in the Ge'ez language. Geez is is an ancient South Semitic language and is a member of the Ethiopian Semitic group. The language originated in southern regions of Eritrea and the northern region of Ethiopia in the Horn of Africa.