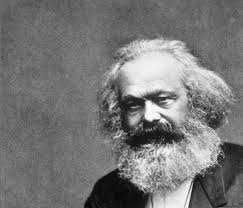 It goes without saying the amount of influence that radical left socialists and Marxists have had on black people's thinking.  Among those who have prominently espoused Marxist ideas and have preached his doctrine to black people include: Paul Robeson, CLR James, A. Philip Randolph, W.E.B. Dubois, the Black Panther Party, the Revolutionary Action Movement (RAM), The Black Liberation Army, George Jackson, Angela Davis, Derrick Bell, Bayard Rustin, Stokely Carmichael,  Dr. John Henrik Clarke, Bell Hooks, Cornel West (who publicly states that his theories are derived from Georg Lukacs) and Manning Marable among others.  It's also interesting to note that Martin Luther King's behind the scenes financier, top advisor and speech writer (he co-wrote the I Have A Dream Speech) was former Communist Party member, Stanley Levison.
Marcus Garvey already exposed the curious oversight with regard to Marx' famous work 'The Communist Manifesto.'  Garvey was aware that ‘The Communist Manifesto’, written by Karl Marx and Friederich Engels in 1847, incredibly, does not even mention the massive enslavement of African people, which was still going on at that time and was a serious issue.

However it has now come to light that...

in a letter to Engels, in reference to his socialist political competitor Ferdinand Lassalle, Marx wrote: "It is now completely clear to me that he, as is proved by his cranial formation and his hair, descends from the Negroes who had joined Moses' exodus from Egypt, assuming that his mother or grandmother on the paternal side had not interbred with a nigger. Now this union of Judaism and Germanism with a basic Negro substance must produce a peculiar product. The obtrusiveness of the fellow is also nigger-like."
Engels shared Marx's racial philosophy. In 1887, Paul Lafargue, who was Marx's son-in-law, was a candidate for a council seat in a Paris district that contained a zoo. Engels claimed that Lafargue had "one-eighth or one-twelfth nigger blood." In a letter to Lafargue's wife, Engels wrote, "Being in his quality as a nigger, a degree nearer to the rest of the animal kingdom than the rest of us, he is undoubtedly the most appropriate representative of that district."
Published by Alan Dixon at 6:57 AM

The Bolshevik Revolution in Russia was a jewish Racial revenge plot, it was White Genocide, they killed so many White Christian Russians it isn't even funny.

The Frankfurt School was a Jewish thing.

Marx was a Jew

Lenin was a Jew

Stalin was a Jew

Trotsky was a Jew

Georg Lukacs was a Jew

Willi Munzenberg was a Jew

Max Horkheimer was a Jew

Theodor Adorno was a Jew

Erich Fromm was a Jew

Herbert Marcuse was a Jew

Sigmund Freud (or FRAUD) was a Jew

Antonio Gramsci was a Jew

Pretty sure Sheila Jeffreys is a Jew she talked about Maimonides a awful lot, who is a jew

Stanley Levison was most certainly a Jew

Eric Mann was a Jew

George Soros and obviously also his son Alexander are both Jews

Should I go on or are you beginning to get the picture here?

You non-whites are literally the Golem of the jews.

They are going to use you people as cannon fodder when they attempt to do to America what they did to Russia and kill off the White Christians.

Communism / Bolshevism / Marxism / Critical Theory / Etc. etc. etc. is all jewish bullshit, has nothing to do with White People. The jews are using this shit to take down and destroy White Societies / Civilizations / Countries / Nations / Etc. And they (the jews) are using you people (Blacks & other Non-Whites) as weapons of mass destruction against White People. You non-whites are nothing but cannon fodder to the jews, wake up!

"This 'Communist/Marxist approach completely ignores the fact that we had been brainwashed and mentally enslaved for 400 years. This needs to be addressed."

Yea the JEWS don't want you to address your slavery in fear that you will discover it was THEM (THE JEWS) who owned, ran, and controlled the Slave Trade.

Read the Book "The Secret Relationship between Blacks and Jews" also look into Dr Tony Martin (a Black Man) he did lots of research on this subject.

THESE ARE JEWS NOT EUROPEANS / WHITE PEOPLE. LEARN THE DIFFERENCE OR YOU WILL ALWAYS BE THE SLAVES OF THESE JEWS, WAKE UP!

SLAVERY WAS A JEWISH THING, WHITE CHRISTIAN MEN ENDED IT.

JEWS OWNED ALL THE SLAVE SHIPS

THE TRUTH IS OUT THERE!

SLAVERY STILL EXISTS IN THE ISLAMIC & AFRICAN COUNTRIES, AS WELL AS OTHERS ( I SEE YOU ISRAEL ! JEWS! )

Thank you for tthis