It is often easy to get confused by the word truth or certainty. Fortunately, the mystics coming out of the Eastern Sufi tradition helped us with this problem many years ago. Someone can say something is "their truth" or claim to know something that none of us can know...because we are not them. This 'truth' is undeniable. But as related by the Sufis, there are Levels of truth; at least three. 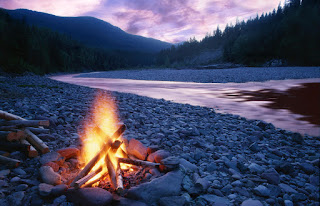 Say you are in a mountain valley and someone tells you there's a fire on the other side of the mountain. Say it's your best, trustworthy friend who tells you this. This would be called 'Ilm al Yaqin (The Knowledge of Certainty). But it's possible your friend made an honest mistake. Maybe you want to know more about this fire, so you climb the mountain to see for yourself, and you do see a fire, glowing in the distance. This is called Ayn Al Yaqiyn (The Eye of Certainty). You know there's a fire there because you can see it. But seeing isn't always believing.  Maybe it's a faux fire or a manmade fire like the synthetic yuletide fireplace lights sold at Sears. So, you walk closer to the fire, see it up close and then feel its warmth with your hands. This is called Haqq Al Yaqiyn (The Truth 'or the Reality of Certainty.
This is the highest level of knowing. It is not always about what's true and what's not, sometimes it's about understanding the various level of truth which applies best to a situation.
It is similar to the level of truth Neil deGrasse Tyson discusses here when making a distiction between subjective truth and objective truth. *Subjective truth is similar to saying "I feel there is a fire on the other side of the mountain; or 'I believe' there is a fire on the otherside of the mountain. That is true. The pesron does beleive it (as far as we know) but that's all we know. It's not really useful informaion. Tried and true or tested information tends to benefit society because we don't live in other people's heads and can't rely on that as a working foundation of knowledge.
Published by Alan Dixon at 1:17 PM 1 comment: